CVSuite, in partnership with Economic Modeling Specialists International(Emsi), aggregates multiple streams of data into our tool to provide the most complete picture of the creative economy available. These include data from vetted and trusted government institutions such as the Bureau of Labor Statistics (BLS), the Bureau of Economic Analysis (BEA), and the Internal Revenue Service (IRS). The compiled data fall under five distinct categories:

COMPREHENSIVE COUNT OF JOBS
CVSuite defines a “job” as an instance of employment within an occupation. Each job is categorized by one of the four classes of workers. This method of defining jobs helps capture the full spectrum of types of workers that make up the creative economy.

STANDARD OCCUPATIONAL CLASSIFICATION:
Federal statistical agencies use the Standard Occupational Classification (SOC) system to classify workers into occupational categories for the purpose of collecting, calculating, or disseminating data. All workers are classified into one of 840 detailed occupations according to their occupational definition.

You will find a listing of all occupations available in the CVSuite in the table below. In the table, you will find the six-digit SOC code, a brief description of the occupation, and a definition of the occupation. The SOC codes, occupation description, and definition are taken from the United States Bureau of Labor Statistics. More information about this topic can be found at the Bureau of Labor Statistics site.

HOW THE OCCUPATIONS WERE SELECTED
The occupations offered in the CVSuite were selected based on two criteria:

Creative industries are the industries producing goods and services within the creative economy. They employ both creative and non-creative workers.

COMPREHENSIVE COUNT OF JOBS
CVSuite defines a “job” as an instance of employment within an occupation. Each job is categorized by one of the four classes of workers. For industry job counts, CVSuite considers all occupations that make up a creative industry.

You will find a listing of all industries available in the CVSuite in the table below. In the table you will find the six-digit NAICS code, a brief description of the industry, and a definition The NAICS codes, industry description, and definition are taken from the United States Census Bureau. For more information regarding this topic please visit the United States Census Bureau site.

It is important to make clear that Industry Sales and Industry Earnings measure two different types of impacts on the creative economy:

INDUSTRY SALES
Sales (also referred to as “revenue”) are calculated by multiplying the price at which goods or services are sold by the number of units or amount sold. Industry sales is comprised of the amount of money that companies in a given industry actually receive during a specific period, minus discounts and deductions for returned merchandise. It is the “top line” or “gross income” figure for an industry from which costs are subtracted to determine “net income.” 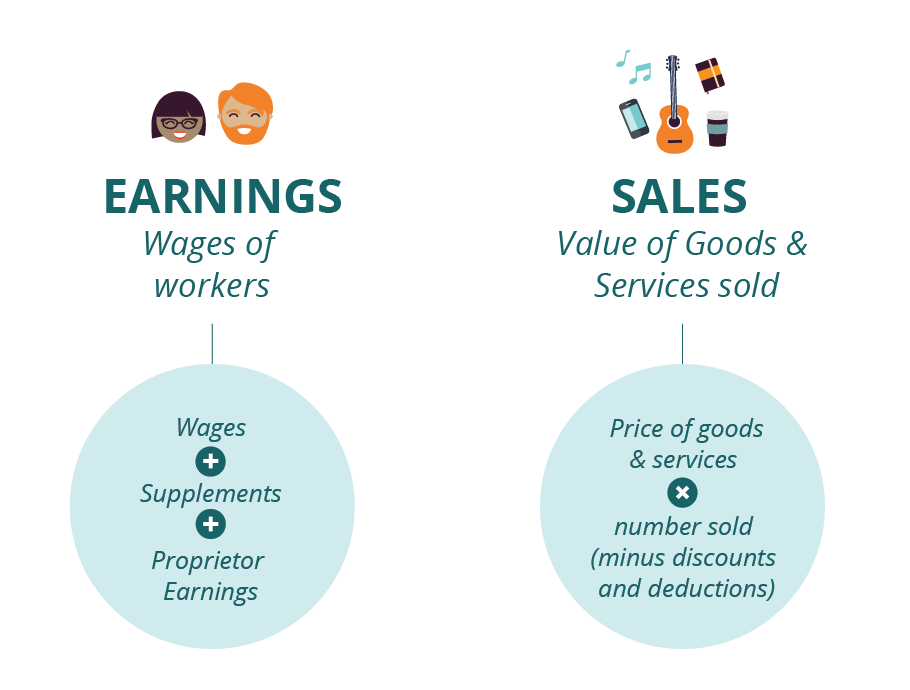 For a deeper dive into CVSuite Sales vs. Earnings data, read: CVSuite Data Dives: The Key Differences Between Industry Sales and Earnings Data.

Demographics show the region’s population size, age, and gender makeup. Additional demographic information on race and ethnicity, as well as demographics on industry and occupation jobs, can be found in the Data section of the CVSuite tool.

SOURCES OF DATA
Demographic data are made available via the U.S. Census Bureau’s Quarterly Workforce Indicators (QWI) and American Community Survey (ACS). While QWI data provide workforce demographics for industries only, we also use ACS and staffing patterns to derive occupational estimates. Race/ethnicity data include the region, as well as both job totals for occupation and industry.

The race/ethnicity categories, available in CVSuite, are as follows:

CVSuite covers the full spectrum of employment types, from full-time workers, such as those measured by state labor departments, and part-time and self-employed workers. Use the “data settings” function in the CVSuite to select between these different “classes” of workers.

4 TYPES OF EMPLOYMENT IN CVSUITE
1. Quarterly Census of Employment and Wages (QCEW)
The QCEW class of workers represents full-time employees. This is simply unsuppressed QCEW data and will closely resemble what you would get from your state labor market information office. This means that any employment number that QCEW publishes will show up in our tool as the exact same number. Anyone who needs Emsi numbers to stick closely to Bureau of Labor Statistics QCEW numbers will have employment numbers that match.

2. Non-QCEW Employees
The Non-QCEW data represent the part-time employees. This set consists of other groups of employees who are not captured by QCEW data, but who still count as employees. These include railroad, military, some non-QCEW federal government workers, unemployment insurance exempt nonprofits, and a few other miscellaneous categories. These data are particularly helpful for evaluating those tricky military and government sectors that can dominate regional economies.

3. Self-Employed
These are self-employed workers who count their self-employed work as their primary source of income. Including these workers alongside our more traditional data sets will give you a more complete picture of your region’s employment numbers.

4. Extended Proprietors
These are workers who are counted as proprietors but classify the income as peripheral to their primary employment. Many industries (primarily oil and gas extraction, finance and insurance, and real estate) include people who are considered sole proprietors or part of a partnership, yet have little or no involvement or income in the venture. An increasing number of people fall into this category (e.g. those who do freelance work on the side, like writers or musicians), and now you will be able to identify these types of workers more clearly.

Keep in mind that our data provider, Emsi, models occupational data from more than 80 different public and proprietary sources. Emsi updates its occupation data quarterly based on when the data sources it uses in its model are updated. When these updates occur, previous data are also adjusted.

So what does this mean for you? First, you will notice that the updated data in the tool will look different after they have been updated. For example, 2012 job numbers from the quarter one data update might look different than 2012 job numbers from another year’s data update. By offering multiple data sources from Emsi, CVSuite provides you with the most complete picture of your area’s creative jobs. Having just one data source is not enough to measure the complex features of your creative job market. CVSuite’s data sources work in tandem with each other, filling in the gaps that would be left by using only one data stream.

These types of quarterly updates are considered a data best practice. Having access to the most current, accurate numbers provides a better understanding of the creative workforce in your region. Visit the Current Data Release Notes page for more information on the current data.