The Creative Vitality™ Index compares the per capita concentration of creative activity in two regions. Data on creative industries, occupations, and cultural nonprofit revenues are indexed using a population-based calculation. The resulting CVI Value shows a region’s creative vitality compared to another region.

Similarly to how Body Mass Index (BMI) can serve as an approximation of your body’s health, the CVI has been designed to approximate a region’s creative economic health. The benefit of indexes like these is in their ability to quickly and simply communicate, in a single number, how many variables interact with each other.

That single number, the CVI, is a ratio of all of the integrated creative economic variables compared to the United States, which has a CVI value of 1. For example, the creative vitality of a region with a CVI value of 1.5  is 0.5 times more concentrated than the national average.

The CVI has a number of uses. The Index can serve as a diagnostic tool to identify strengths and weaknesses in an area’s creative economy. From that diagnosis, community leaders can strategize to encourage growth in a particular segment of the creative sector of their local economy. The Index can also be used to benchmark work in a certain segment of the creative economy and to track progress against that benchmark. Finally, the CVI is a credible source of data that can serve as a point of departure for a discussion about the scope and relative health of an area’s creative economy with a variety of stakeholders.

The CVI is built from four indicators: number of jobs within specific creative occupations, industry sales from specific industries, and arts and culture nonprofit revenues. These indicators give a broad picture of the health of a region’s overall creative economic health. Choosing the exact indicators stemmed from conversations around combining economic development and nonprofit sector methodologies to help the field better understand the creative economy. Once thought to be independent areas of study, the for-profit and nonprofit indicators were chosen due to their correlation with a region’s overall creative economic health.

For the detailed list of occupations, industries, and nonprofits visit our CVSuite Codes page. 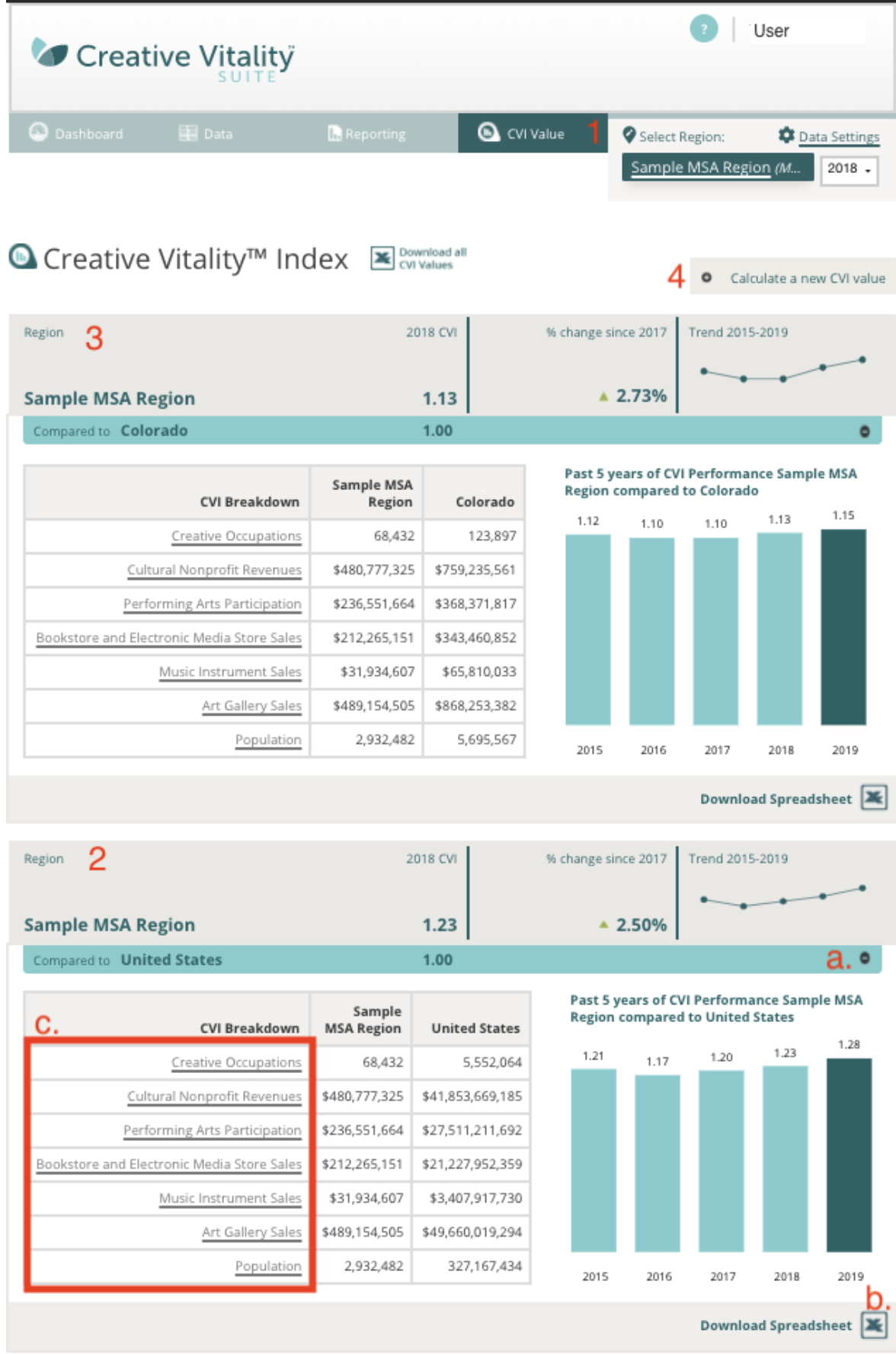 The CVI Value in CVSuite is set by default to show the creative vitality of the region selected compared to the U.S. This default value can be found on the left hand side of the dashboard and within the Snapshot Report. Refer to the New to CVSuite guide on where to locate your selected region’s CVI value.

To access the CVI and compare regions, select the CVI Value from the top menu (1). This will take you to the CVI page where you can see the CVI value and create new CVI comparisons.

COMPARING REGIONS WITH THE CVI

It is also possible to quickly compare two custom regions by clicking the “Calculate a new CVI value” (4). A new region selection tab will display, as shown below:

This tab will allow you to select two regions to compare based upon regions you have previously created or you can select a comparison region from any of the geographies included in your account.

By default, only the CVI value, CVI percent change since previous year, and 5-year CVI trend are shown on the CVI page. Clicking the “+” button (a.) will display the creative occupations’ job numbers, creative industry sales, nonprofit revenues, and regional population that make up the CVI.

Using the CVI to Compare Your Creative Economy to Other Regions