Gülgün Kayim: Director of Arts, Culture and Creative Economy for the City of Minneapolis

You are a teacher, site-specific theatre artist and the director of Arts, Culture and the Creative Economy for the City of Minneapolis. We also know you have a passion for arts research. Tell us a little bit more about yourself.
Well, I’ve always lived a bit of a double-life, so to speak. I was born in Cyprus, grew up in London where I studied for my undergraduate degree. My plan was to study for a postgraduate degree in directing at the International Film School, but the economy was in terrible shape then and I didn’t receive government funding to study. Looking for a way to finance my education, I read how the U.S. had established mechanisms to work and study in further education. In the end, I found myself studying for an advanced degree in directing in the United States. After my studies, I continued with my artistic work, but with limited government funding in the U.S., my artistic work had no hope of sustaining itself.
The relationship between artistic choices and economic choices are closely tied together. They’re very intertwined and, as a result, as an artist, you have to make some really important decisions. I was a successful independent artist for 10 years and then the economy forced me back to the workplace. I had to make some tough professional choices: Would I give up my passions—which I actually tried, and failed to do—or look to use my talent and knowledge in other ways? I decided to put my skills to use in an administrative capacity, which would also allow me keep my artistic passions alive.
I still have a creative practice that is very active, but the type of work I do generates very little income, but people shouldn’t abandon their art in order to do a job. Artists have to piece their lives together. You can be a fully functioning artist while still having a full-time job.
Like all artists, having a creative outlet is the thing that keeps me going. It’s your calling and you have to find a way to do it. When I direct a play, I am leading a production, and my current role is no different.
What is your connection to data?
I’m not a data scientist. I’m not a data cruncher. I don’t come from the world of evaluation or the science of it, but, through necessity, I learned about what evaluation and data can and cannot do and learned about the lack of it in the creative sector and the need for it.
It seemed like the creative sector spent a lot of time on qualitative evaluation, and that’s good, but it didn’t really help to tell the story, especially to those who have little time to read. Often, the people you are trying to communicate with don’t have time to sit and read long reports. I find that you need to strike a balance.
Tell us about Minneapolis and the need for the 2015 Minneapolis Creative Vitality Index Report.
Minneapolis is a very vibrant, robust, creative city. If you’re in it, you know it, and you’re always surprised when you talk to people who don’t know it and can’t see it. But there was nothing tangible to help us see and communicate that. Once you’ve collected the data, you have to find a way to successfully communicate it.
Data is actually very creative. It provides a snapshot in time and gives us something tangible to point to. With data, you are able to offer a comparison. Our user group said, “We see all of these numbers, but what do they mean? Minneapolis’s creative sector is successful in comparison to what?” 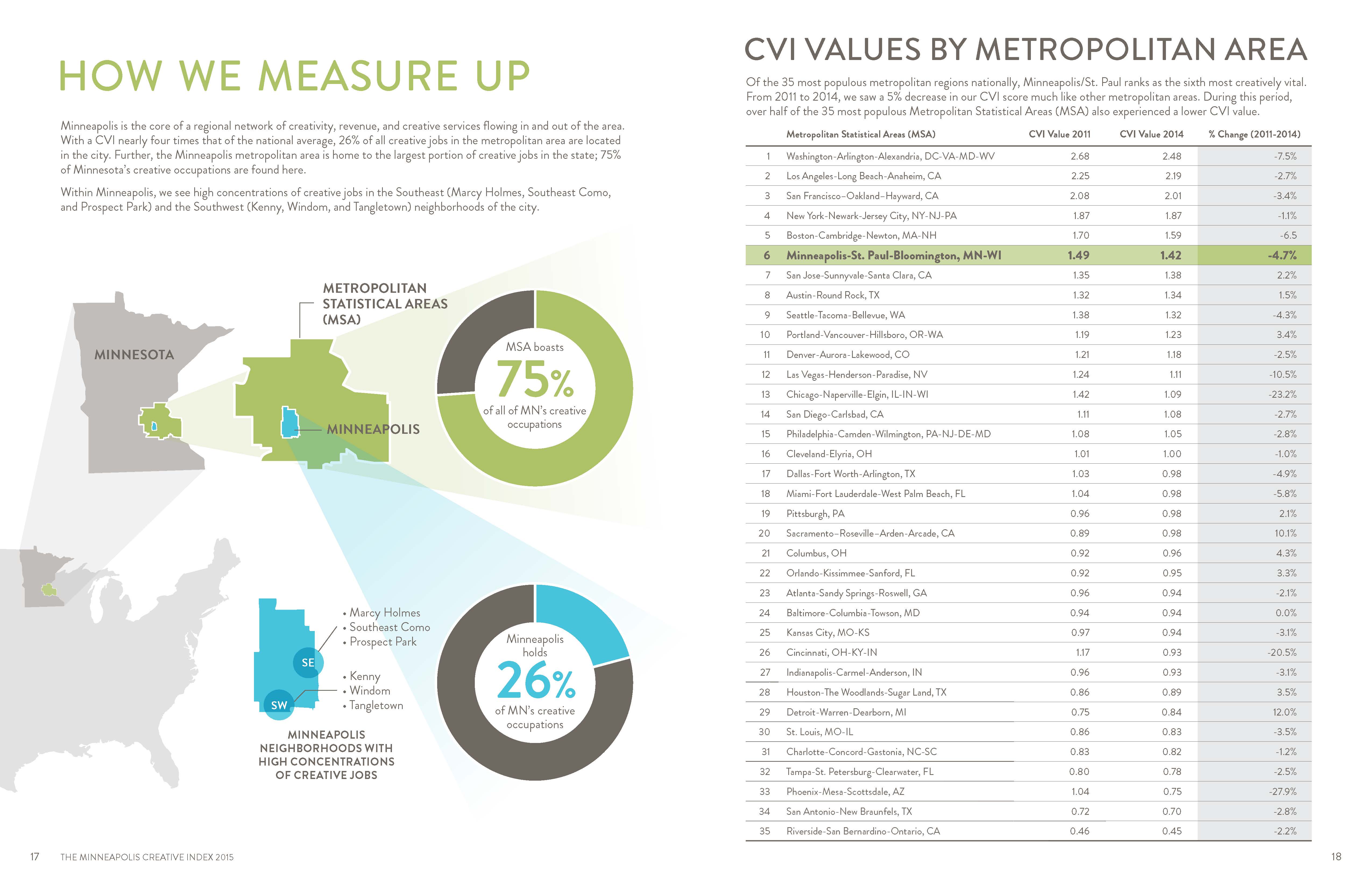 What comparison did you use in the 2015 Minneapolis Creative Vitality Index Report?
We chose a very purposeful comparison. The comparison we chose was sport and it was a very big eye-opener. Sport is a very fuzzy area; the investment and belief around sport drives high investments. The city of Minneapolis is building giant sports facilities. The data confirms, however, that the creative economy of Minneapolis actually generates eight-times more income than its sports.
To some, art can be just as fuzzy as sport, but a song, a dance, and a poem are forms of summative evaluation. We felt that a lot of the outcomes of the arts that the city invests in—which are mostly tourism- and audience-based—are actually driven by the people at the center, who are the producers of the work, but yet the city is not investing in those people and their skills.
What is your process in conducting these studies and producing these reports?
In an attempt to find out what questions we should be asking this time, we held focus groups with a wide range of people: arts orgs and people who represent large groups of artists, human geographers, people from low-income housing, and creative placemaking.
This year we decided that we wanted to make the report about racial equity. We’d never had a report before that had applied demographics to qualitative data.
What is your role in creating the Creative Index Report for the City of Minneapolis?
My role is to guide the report and try to ask the right questions before the actual analysis takes place. I believe that the key to producing a successful report is to think about what questions we are looking to answer, but a lot of other people don’t seem to see it that way.
Many people in the creative sector see having to create annual reports as a restriction. We see it as freedom. We see it as we don’t have to be perfect. We know that the report we produce is not the ultimate. Our reports are an iterative process and we seek to improve each time. After all, isn’t that the creative process, refining and getting better?
What is useful about the data in WESTAF’s Creative Vitality Suite as compared to other data sources?
We recognize that the index is a communication tool and we really embraced that notion. The data provided by WESTAF supports what we are trying to communicate and it best represented the audience that we wanted to reach. That audience included elected officials and their aides—people not in the art world. It also includes economic development employees and planners—areas we were trying to influence. The people who would use this are not just involved in the art world.
The Minneapolis Creative Vitality Index Reports for the last three years can be view by clicking the links below:
2015
2014
2013