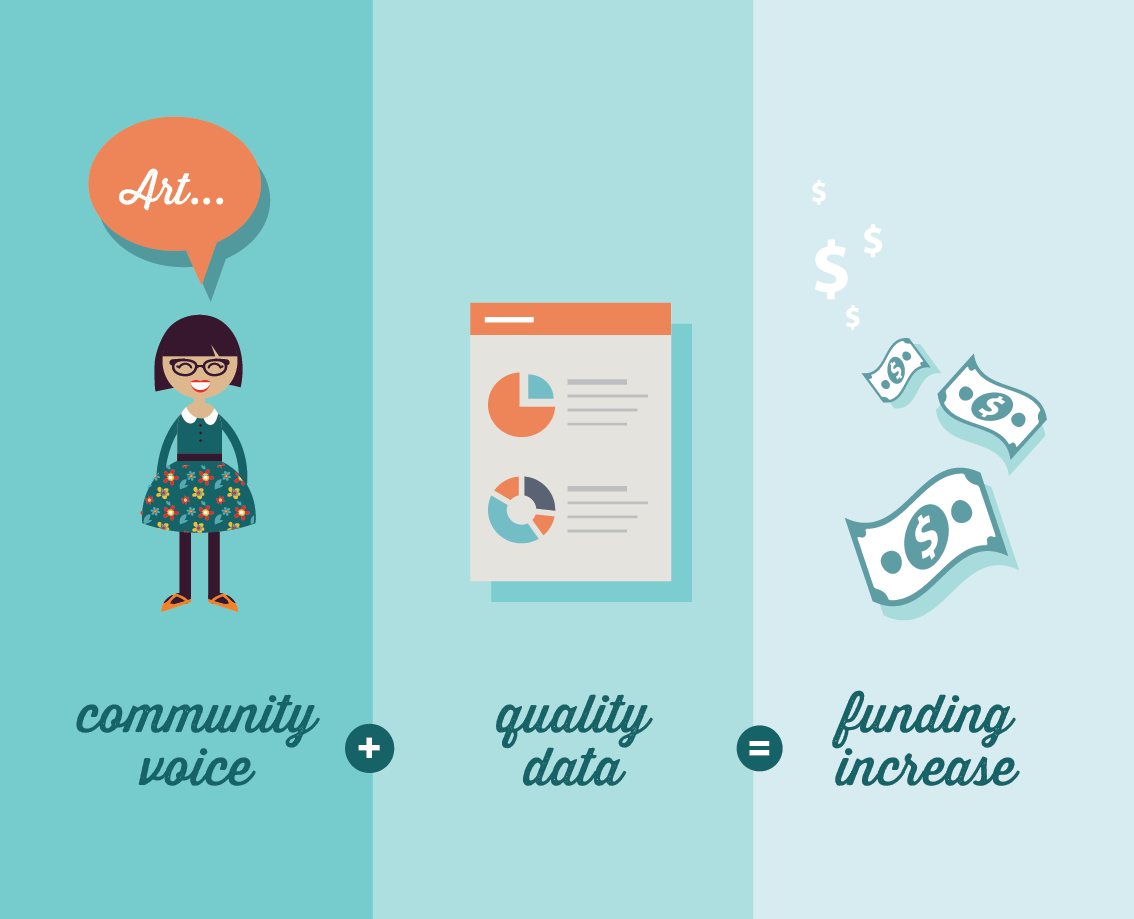 Ellensburg, Washington, is a small community located approximately 100 miles east of Seattle. Seeking to increase its annual budget of $8,000, the Ellensburg Arts Commission approached its city council in 2012. Before saying “no,” the city council requested more information on how increasing the arts commission’s budget would benefit the community. The arts commission used Creative Vitality™ Suite (CVSuite) data to make that case. In 2015, that effort resulted in a 300% increase in the Ellensburg Arts Commission’s annual budget.

The Need to Increase Funding

Despite its small population, Ellensburg supports a number of arts activities through the independent nonprofit Gallery One Visual Arts Center. Monica Miller, director of the arts center and a member of the Ellensburg Arts Commission, noted that the arts commission’s 2012 budget wasn’t enough to keep up with the city’s creative community. Miller stated, “We really had very little leverage with the money that the city was allocating to us. And we had zero room to grow.”

Data Needed to Make the Case

Knowing that the city council made many of its budget decisions based on economic data, the seven-member arts commission began seeking data that measured the economic return on the city’s investment in the arts. “We all knew that the arts mattered to our kids and to the quality of our lives, but we couldn’t say why it was important to the city’s budget, what their return on investment was going to be,” Miller said.
The arts commission was prepared to rely solely on Americans for the Arts data until it was presented with the opportunity to partner with the Washington State Arts Commission to get access to Creative Vitality Suite data. Miller believes that the CVSuite provided Ellensburg Arts Commission with the data it needed to effectively convey the value of the arts.

Pairing Data with the Voice of the Community

The commission supplemented its CVSuite data with testimonials from members of the community who valued the arts, which helped strengthen the case that additional funding for the arts was needed. Arts commission staff then used CVSuite data as a starting point for conversations with city council members about the value of the creative economy. Said Miller, “We engaged in a conversation with them about what they valued about the arts, and if they felt that this information was relevant and/or important and would be helpful to making our ultimate case to the city council.”

The data provided by the CVSuite gave the arts commission a tool to measure–and communicate–the economic impact of artists and galleries on the community. According to Miller, “The biggest impact [of the CVSuite data] was that we could look at numbers and that there was proof.” The arts commission used CVSuite data and the testimonials it collected in a proposal to the city council asking it to apportion 10 percent of its construction sales tax revenue to fund the arts. The council agreed to the proposal.

The outcome secured funding for Ellensburg’s future. In 2014, the city council allocated its standard $8,000 from the operating budget for the arts commission. In 2015, the Ellensburg Arts Commission received $25,000, 10 percent of the construction sales tax from 2013. Moving forward, the plan is to continue that level of funding. “It’s a huge benefit,” Miller said, “Before, if we didn’t spend the money, it would get rolled back into the city’s operating budget. Now, we’ll be able to keep that money, grow it, and use it to leverage more arts funding.”
Using CVSuite data and input from members of the community, the Ellensburg Arts Commission was able to convey the economic value of the arts to key stakeholders, making a long-term impact on this small–but culturally active–region of Washington state.

How They Did It

To make the case for increased arts funding in Ellensburg, the arts council:

The Ellensburg Arts Commission is dedicated to promoting performing and visual arts in historic Ellensburg, Washington. Through their work with the nonprofit Gallery One Visual Arts Center they provide their creative community with opportunities for exhibition, education and work space. The Ellensburg Arts Commission used CVSuite data to increase funding in their community with a percent-for-art initiative.