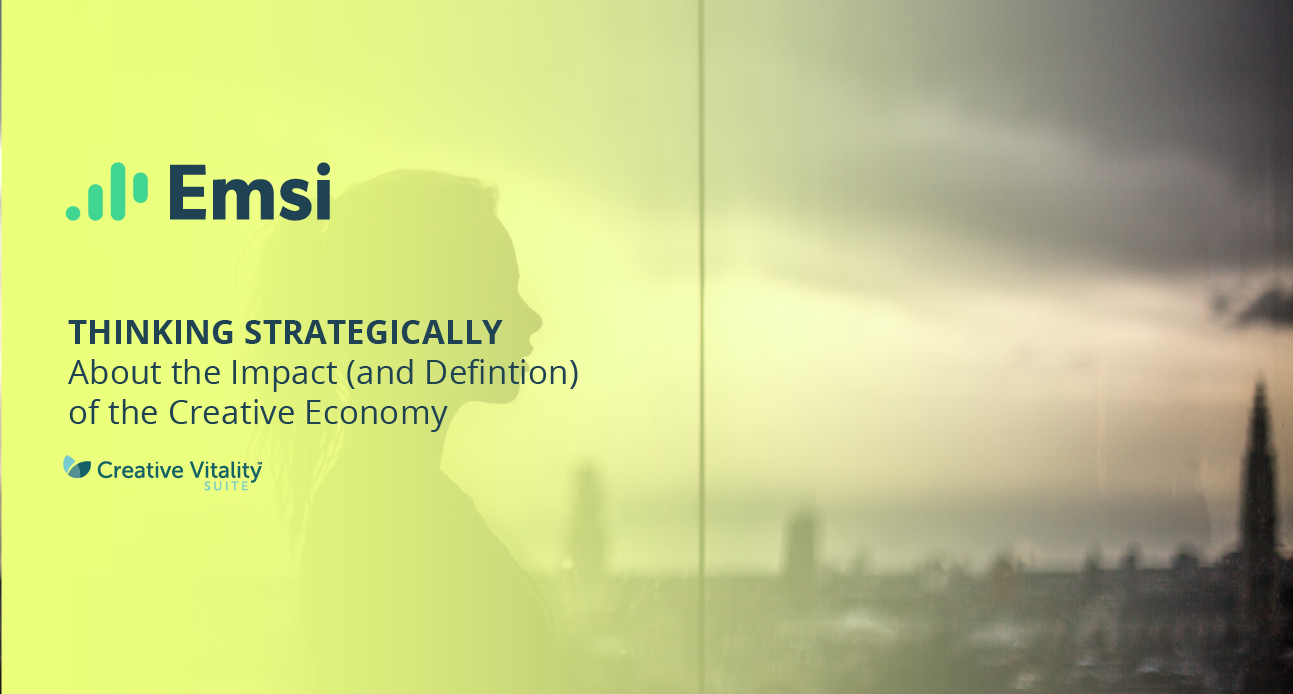 Emsi Interviews CVSuite: Thinking Strategically About the Impact (and Definition) of the Creative Economy

CVSuite’s data partner, Emsi, interviews the team about best practices in creative economy definition and the history of the Creative Vitality Suite. This blog originally appeared on Emsi’s blog and was written by Joshua Wright. For more on Emsi data, click here.
For good reason, the creative economy and economic development are closely linked. Prosperous communities, the ones attracting new business development and skilled talent, generally have a healthy creative cluster that can lift rural and urban areas alike.
No one knows this better than WESTAF, a nonprofit organization that helps arts organizations understand their impact and define the creative economy in their region.
One of WESTAF’s goals is to help arts organizations “start to think more strategically about their contribution to their overall economy and start to think about workforce development,” says Nicole Stephan, director of WESTAF’s Creative Vitality Suite.
This is where labor market data—and WESTAF’s partnership with Emsi—have proven so valuable.

In the early 2000s, WESTAF began discussions with the Washington State Arts Commission and the Seattle Arts Commission about a new kind of impact study on the creative economy. Collectively they came up with the idea of an index that would measure the relative economic health of the creative sector in a defined region. Think the Dow Jones Industrial Average for the creative economy. “Now obviously not as major as that,” says Anthony Radich, executive director of WESTAF. “But we could say, ‘Seattle has a net number of 4 and the national index level is 1, so Seattle has a lot of robustness there.’”
The Creative Vitality Index (CVI) was born. It is a carefully selected set of information—employment data from creative occupations, sales in creative industries, etc.—and it gives organizations and communities a baseline to work from. In 2011, CVI online launched, a software tool that merges nonprofit data and labor market data from Emsi.
In 2014,  expanded the CVI data offerings and launched the Creative Vitality Suite. State and local arts agencies, along with other entities, use the CVSuite to measure and communicate the economic impact of their local creative economy, explore the labor market for creative occupations down to the ZIP code level, and make their case for grants.

“That kind of dichotomy is similar to what [arts] organizations face,” Stephan says. “They’re attached to creative industries the way that they’ve always known them and funded them. In the near future there will be a jumping-off point, where to continue to receive funding they need to transition and better understand the creative economy needs in their communities and how they can make that leap.
“Maybe a partnership with a private entity would help them receive funding from new sources or actually redirect their impact. Driven by changes in the economy, standard funding models and sources are becoming less capable of acting as the sole support for organizations in the way they once did.”

Emsi has provided the labor market data inside the CVI, and now the CVSuite, for years. The partnership works so well because Emsi and WESTAF are like-minded in wanting to serve communities and educate their clients about the rights and wrongs of economic impact analysis and data use.
Stephan also points to Emsi’s history with labor market data and third-party status as reasons for the successful relationship.
“First off, from my perspective and my experience working on the project, Emsi is the leading provider of this type of data,” she says. “And I think that’s essential—to be able to look at different types of employment versus just being limited to going and getting BLS data or something. Because when we meet with other researchers, that’s generally speaking what they’re doing. They’re doing their own hand-pulling of data and trying to assess codes.
“It’s also appealing that Emsi’s background is such that it is defensible. You’re outside of the arts, so having a third party that is neutral that works in the economic development space and with higher education … to me that’s just a solid foundation that we can turn to.”
Looking forward, Radich and Stephan see huge opportunity in expanding who uses the Creative Vitality Suite and how they use it. The data they provide is proving to be essential to arts organizations at the community and state level. And Emsi is privileged to work alongside them.
This blog originally appeared on Emsi’s blog and was written by Joshua Wright. For more on Emsi data, click here.