This post is part two of a four-part series on the ever-growing understanding of the creative economy. It explores the groundbreaking report “The Orange Economy, An Infinite Opportunity”, which was issued in 2013 by the Inter-American Development Bank.
Part 1: Notable Events in the the last 20 years in the Creative Economy

Image from: The Orange Economy Report, pg. 102 “The impressive performance of the United States makes the Orange Economy of the Americas a clear global leader.” (see Appendix 2 in report for methodology and detailed sources) 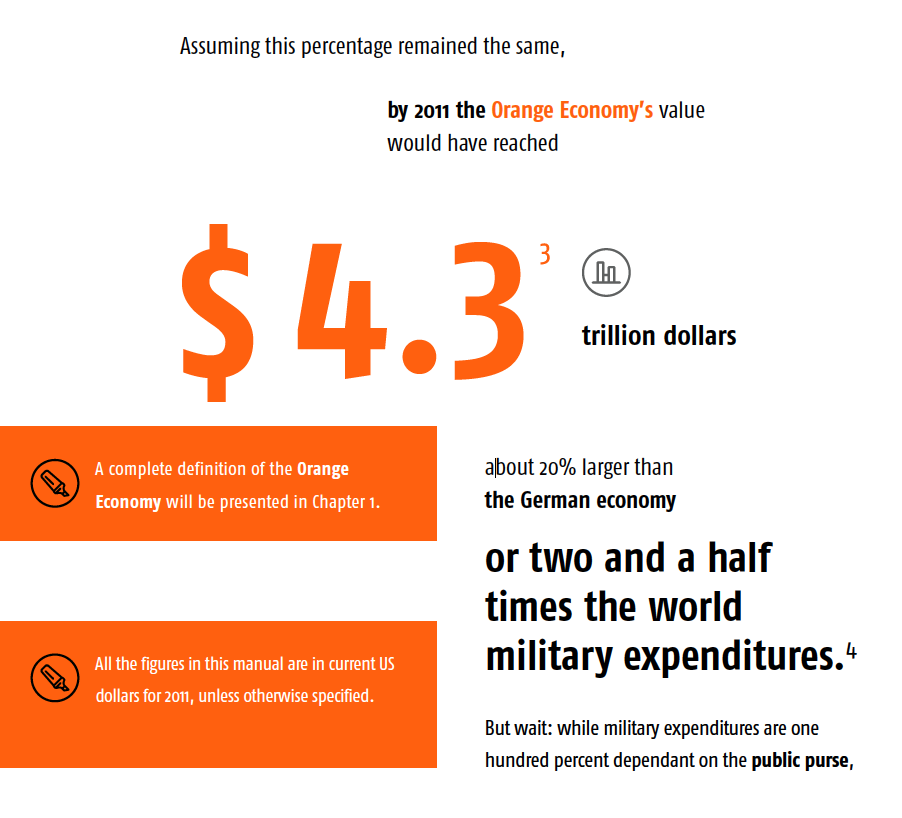 The 7is Framework
The final section of the report is dedicated to the presentation of an introductory guide for the development of public policy to support the Orange Economy. The proposed framework is referred to as “the 7is.” The 7is are: Information, Institutions, Industry, Infrastructure, Integration, Inclusion, and Inspiration and revolve around solutions regarding what is lacking in Orange Economy development.
The Information section of the 7is includes a commentary on the lack of knowledge exchange regarding the creative economy and a related need to use this kind of exchange to establish development benchmarks. Also noted is a lack of Institutions representing the Orange Economy present at key economic development debates. In the Industry section, the authors note a lack of education of those in creative fields regarding how to value their work, be fiscally responsible, and attain business savvy to be able to connect funding, entrepreneurs, and creatives. The creation of a creative economy Infrastructure is required to provide networks to connect creatives to content, technology, business, and placemaking initiatives led by the creatives with resources is viewed by the authors as a stepping stone to moving this vision forward.
The Integration segment focuses on issues specific to Latin America, highlighting the importance of cultural exchange and trade policies that currently lead to a low value for creative exports from Latin American. Inclusion concerns how the Orange Economy can be a tool for working across social divides, in that the creative economy can establish jobs that often require a low level of investment. Inspiration, the final component of the 7is, identifies an area that is somewhat more challenging to quantify. The authors recognize the need for creatives to have inspiration, and they underscore the need for an environment that fosters problem solving and allows for failure.
For the Orange Economy to grow through the adoption of the 7is, the authors propose that regions must internalize them and make them their own. Not all regions develop in the same ways, so methods that work in one country will not necessarily scale in a neighboring country. Cultural adaptation and appropriation of the 7is framework, along with increased communication among regions, is essential in attaining the type of global change the Orange Economy report envisions.