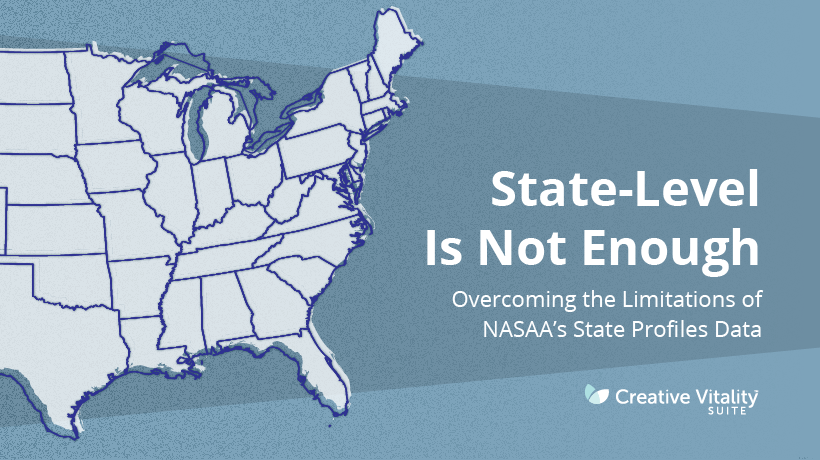 The National Assembly of State Arts Agencies (NASAA), in collaboration with the National Endowment for the Arts (NEA), recently released a new online tool called “Creative Economy State Profiles.” The tool is based on the Arts and Cultural Production Satellite Account (ACPSA) work that was executed several years ago by the NEA and the Bureau of Economic Analysis (BEA). The tool makes available state-level reports on creative economy data. In addition, the state-profile data offer trending data by state related to value added, compensation, and jobs. Previously, these data had only been available at the national level.
The report identifies $764 billion in value that was added to the US Gross Domestic Product by arts-related economic activity. “Value added” is an industry’s gross output minus intermediate inputs that are consumed while making products. In addition, the data presented indicate that the arts and culture industry grew in the calendar year 2015 at the rate of 4.9%. At first glance, the numbers reported in the Creative Economy State Profiles tool are impressive; however, they are limited in their applicability to real-world research.

Though the CVSuite and the NASAA online data tools differ significantly in their approaches to managing and presenting data, both have made a contribution to understanding the role the arts play in the economy of the United States. The CVSuite, however, excels in that it provides arts administrators and researchers with more current and more frequently updated data. In addition, it enables multiple approaches to analyze creative economy data. Such flexibility in an analysis is important to establish credible relationships with decision makers, who prefer up-to-date, high-quality data. These leaders also prefer to analyze their areas using the creative economy definition they have developed rather than use an inflexible, prepackaged definition that does not reflect their concept of what comprises the creative economy.

The Nexus Between Data and Public Sector Arts Agencies

We want to close with two final words of caution. One is that the BEA-based NASAA report presents a large number as the economic value of arts and culture to the US gross domestic product (GDP). We would caution that “arts and culture” are not generally defined in the same way as is the term “creative economy.” Indeed, while the BEA took pains to examine the degree to which arts and culture play a role in overall creative economy activities, the numbers they have arrived at are quite large and tend to be easily dismissed because they are wide-ranging and beyond the field of belief of most of the target audience. Also, we caution that the NASAA data need to be carefully used so as to not imply that there is a nexus between a state arts agency or the NEA and all creative activities. For example, in the national report, film is estimated to have a value adding $99 billion of $764 billion. When this is presented under the term “creative economy,” it is believable; however, when a public sector arts agency makes an actual or implied claim to have stimulated this economic activity, it is not believable. Film production is a significant activity in the overall creative economy; however, public sector arts agencies have very little to do with the size and scope of that industry.
If you have questions about the CVSuite and how it differs from the new NASAA tool, please contact the CVSuite team at cvsuite@westaf.org.