How to Avoid Common Errors When Advocating with Data

The recent recommendation by President Trump to eliminate the National Endowment for Arts (NEA) has greatly focused arts advocates across the country. Though there have been threats to state arts agencies, there has never been a call to eliminate the NEA.  In the past, such proposals have called only for budget reductions at the agency.
During times of higher advocacy, arts advocates often turn to data that proves the value of public support for the arts. A popular argument is that public funding for the arts contributes meaningfully to a state and/or the federal economy.Using data to make this point can be an effective advocacy tool. However, using such data incorrectly opens the possibility of turning an effective advocacy tool into a weapon of self-destruction. Following are some tips on ways to use data well in an advocacy effort on behalf of a public arts agency.

There is a tomorrow and you will need to advocate then too!

Using data without ensuring that it is accurate and up to date may help an arts advocate in the fury of the day’s fight, but use of such data can plant the seeds of distrust that will bloom tomorrow. Imagine presenting an elected official with data that the official accepts and puts to active use. Then imagine that elected official finding out that the data were mischaracterized, poorly collected, or are used to make unsupported summative claims. That official is not likely to seek you out next time because your poor data made that elected official less credible.

Is there a nexus?

Today, much data is available; however, advocates must use even good data correctly. For example, if an advocate cites the $704-billion size of the creative sector, as reported by the NEA/Bureau of Economic Analysis study, the advocate may mislead. While the country’s creative economy may have had a total value of more than $700 billion, the NEA did not generate or stimulate that entire amount. Substantial industries noted in the report such as broadcasting, motion picture, and advertising– while surely creative in nature–have nearly no nexus with NEA funding or policy influencing. In fact, the NEA has a very small impact on these industries.

How old are the data?

End users of data, including elected officials, have come to expect recent data. Advocates who use old data raise questions about their credibility. If they are advocating for funding today, why don’t the arts advocates have data from today?
The American economy is quite dynamic, and significant changes often occur in very short periods of time. Some data sets are simply too old to be credible.

Is this advocacy data?

Advocates can use all data for advocacy. Though data generated with advocacy as its sole purpose often does not withstand scrutiny. Advocacy data are collected and analyzed in a way that seeks to prove a point in support of it. Often, such data are collected to support the position that: a) the arts are a major part of an economy; b) the arts are growing–in economic terms–from year to year; and c) participation in the arts is growing. There are advocacy data sets in circulation that support these positions; however, there are more credible data sets that do not support these positions.
Advocates who use advocacy data are bargaining away their long-term credibility. More often than not, these data sets and the analyses that emerge from them are created to support advocacy positions rather than to measure a phenomenon scientifically. Such data might help with a short-term advocacy push but, when scrutinized carefully, will not hold up in the long term and ultimately will harm the reputation of the advocates using them.

Below is a table of some of the major sources of data available to arts advocates today. You can use each of the sources to advocate; however, you will find that the sources have different qualities and need to be used for different purposes. Advocates should use data with knowledge of what the data are, how the data were collected, and just what the data are reporting. Not knowing these factors is an invitation to a long-term rocky relationship with elected officials and their staffs. 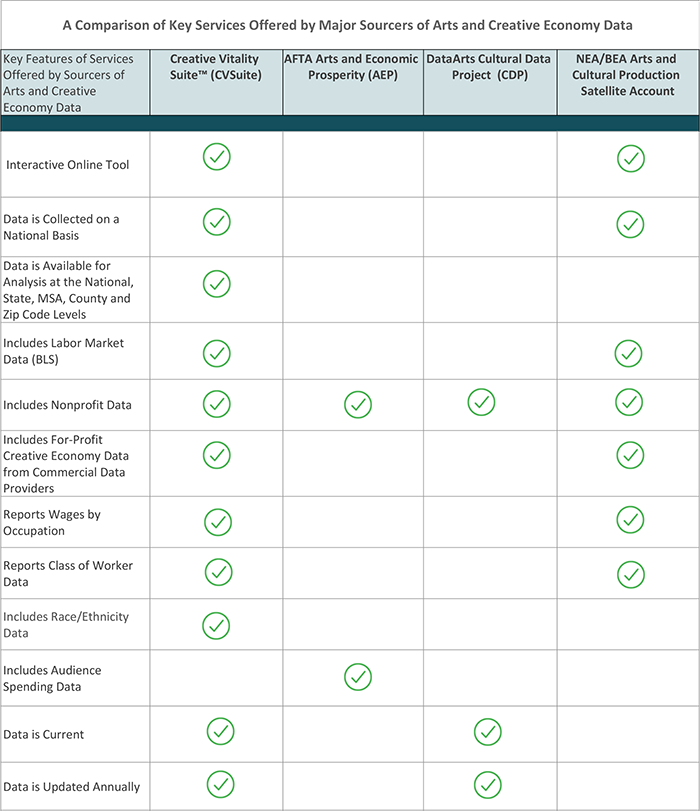